India diverts Rs 56,700 crore from the fight against climate change to Goods and Service Tax regime

By PFPAC July 24, 2017
This news has been causing quite a few ripples, with the most daring allegation being that of siphoning of funds, thus standing in contrast to India's commitment to Paris Accords. Well, the reality goes a bit deeper than merely reductionist. In what way, this happens is eloquently dissected by Anirudh Rajan. 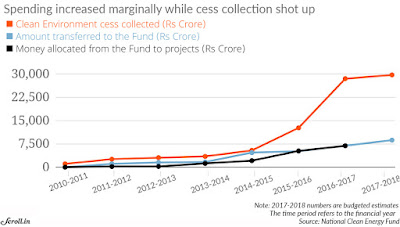 
It is quite evident that in its current form the clean energy cess does no justification to the “polluter pays” principle. It misidentifies the polluter, taxing those most impacted by rising pollution levels and marginalized from energy policy decision making process, forcing them to bear the brunt, both environmentally and financially. This only heightens the regressive nature of the government's diversion of dearly accumulated environmental funds to reserves less constrained in terms of usage. Also to be highlighted is the abysmal fund utilization levels. From 2010-11 till 2016-17, of the total cess mis-collected (Rs. 56,640 crore), transfers to the NCEF amount to a mere 37%. Out of this, less than 81% was actually utilized as project finance. So, only around 30% of collections ever saw application with another meager 7% accumulated in a supposedly non-lapsable fund. The portion of that 30% funneled into priavte purses via Public Private Partnerships (PPPs) is yet to be quantified independently but even a glance at that the bipartisan bonhomie governments share with the private sector would call for an extremely pessimistic prediction. Also to be viewed with suspicion are the NDA sponsored hikes in Clean Energy Cess which doubled annually over period 2014-15 to 2016-17 from Rs. 50/MT to Rs. 400/MT. Why hike funds for projects purposefully underfunded?

The unapologetic siphoning of NCEF’s unutilized accumulations to fund GST compensation to industrially privileged states, to placate disgruntlement over loss of revenues to lessor developed states, has created some public discourse with the rationale and ethicality of the government’s action being questioned and some even declaring it to be immoral. If the loss of 7% is so impactful, what of 63% (collections not transferred to NCEF) for which no explanations exist? Or the rationale behind opting for a regressive indirect tax modeled cess imposed on all consumers instead of levying a direct tax centered variant on the incomes of coal mines and thermal power producers? Or the perennial foisting of duplicitous pro-capital policies masquerading as welfare? These are questions that must be raised as they concern a policy that was conceptually corrupt and which had facilitated a criminal siphoning of public funds.

The discourse over taxation policies must move beyond the reactionary, to question and analyze core aspects and concepts in an effort to effect a shift from accumulative taxation to one that could be potentially redistribute.