Banking? There isn’t much to it than this anyways 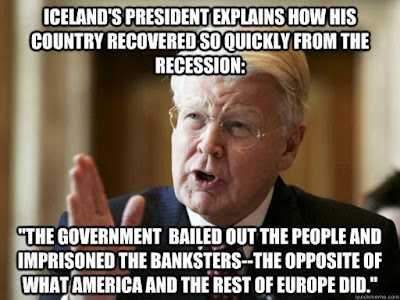 Don’t go by the innocuous sounding title, for this is at its wit alternative. The modus operandi (Oh!, how much I feel like saying modis operandi in honor of the you Indians know who?) for accumulation of wealth to parts of ‘the system’ (which, for historic reasons, we call ‘capitalists’) is banking. The ‘capitalists’ (defined as those that skim the surplus labor of others) accumulate it through the banking system. That is nearly an empty statement, since wealth = money. That is, money is the means of increasing wealth and thus one represents the other. If capitalists skim surplus labor, it means that they skim surplus money. Money is linked to (only!) banks, and thus, accumulation is in the banks.
If interest is charged, borrowers will go bankrupt. This idea can be extended. If interest is charged, all money is accumulated in banks. Or, better to say, a larger and larger fraction of money is accumulated in the banks, and kept in financial institutions. The accumulation of wealth is accumulation of money in and by banks. It can only be interesting to see whom the money belongs to.
By the way, these institutions, the capitalists naturally wanting to part with as little as possible from this money, are often in fiscal paradises. Famous are The Cayman Islands, The Bahamas, The Seychelles, etc. With the accumulated money the physical property is bought. Once again, this is an empty statement. Money represents buying power (to buy more wealth). For instance buying the means-of-production (the Marxian mathematical equation raises its head again, MoP), such as land, factories, people’s houses (which will then be rented to them; more money). Etc.
Also, a tiny fraction of the money is squandered. It is what normally draws most attention. Oil sheiks that drive golden cars, bunga-bunga parties etc. That, however, is rather insignificant, this way of re-injecting money into the system. Mostly money is used to increase capital. That is why it is an obvious truth that “When you are rich, you must be extremely stupid to become poor. When you are poor, you must be extremely talented to become rich”. When you are rich, just let the capital work for you; it will have the tendency to increase, even if it increases slower than that of your more talented neighbor.
To accelerate the effect of skimming, means of production (MoP, ‘capital’), are confiscated from everything – countries and individual people – that cannot pay the loan + interest (which is unavoidable). Or bought for a much-below market value price in a way of “Take it or leave it; either give me my money back, which I know there is no way you can, or give me all your possessions and options for confiscation of possessions of future generations as well, i.e., I’ll give you new loans (which you will also not be able to pay back, I know, but that way I’ll manage to forever take everything you will ever produce in your life and all generations after you. Slaves, obey your masters!)”
Although not essential (Marx analyzed it not like this), the banking system accelerates the condensation of wealth. It is the modus operandi. Money is accumulated. With that money, capital is bought and then the money is re-confiscated with that newly-bought capital, or by means of new loans, etc. It is a feedback system where all money and capital is condensing on a big pile. Money and capital are synonyms. Note that this pile in not necessarily a set of people. It is just ‘the system’. There is no ‘class struggle’ between rich and poor, where the latter are trying to steal/take-back the money (depending on which side of the alleged theft the person analyzing it is). It is a class struggle of people against ‘the system’.
There is only one stable final distribution: all money/capital belonging to one person or institute, one ‘entity’. That is what is called a ‘singularity’ and the only mathematical function that is stable in this case. It is called a delta-function, or Kronecker-delta function: zero everywhere, except in one point, where it is infinite, with the total integral (total money) equal to unity. In this case: all money on one big pile. All other functions are unstable.
Imagine that there are two brothers that wound up with all the money and the rest of the people are destitute and left without anything. These two brothers will then start lending things to each-other. Since they are doing this in the commercial way (having to give back more than borrowed), one of the brothers will confiscate everything from the other.
Note: There is only one way out of it, namely that the brother ‘feels sorry’ for his sibling and gives him things without anything in return, to compensate for the steady unidirectional flow of wealth….
Originally posted at Altexploit