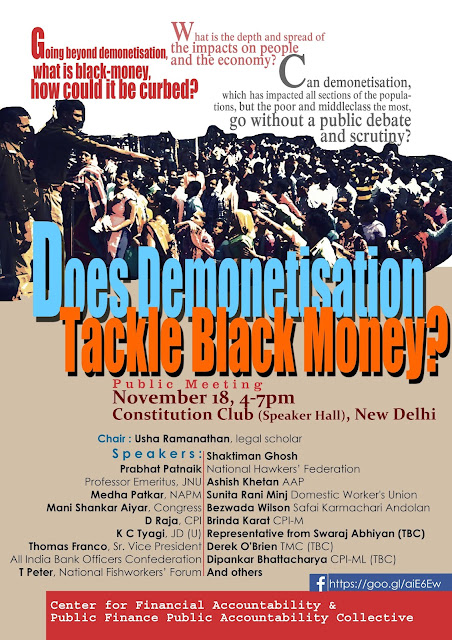 At the stroke of midnight on November 8, 86% of the value of Indian currency which was in circulation in the country ceased to be legal tender.  Many different adjectives are used to qualify that action – surgical strike, master stroke, third freedom (after freedom from British and license raj), 'Massive swachh abhiyan' and so on.

Though the government and even the RBI vehemently defend demonetization, the implementation is continuously taking a toll on the common masses and citizens who are put into extreme hardships. The past few days are witnessing a total lack of preparedness by banks and post offices that lack institutional capacity to deal with such a huge magnitude of workload.  Hoards of people began to throng banks and ATMs which is leading to chaos and aggression.  People are starting to break open shops for food as cash is not available to buy essential things.

Citizens are made to look like suspects and are subjected to hardships and humiliation, in some cases even police lathi charge, for either depositing or withdrawing their hard earned money.

According to Reserve Bank of India (RBI), the total value of the outstanding currency in circulation in the Indian economy as on October 28 stood at Rs 17.77 lakh crore.  The bank account penetration in the country is just 53% and the accounts which are operational are just 15%.  The increase in the bank account penetration in the country from 35% to 53% between 2011 and 2014 due to Jan Dhan Yojana is accompanied by the fact that  72% of these accounts are zero balance accounts.

The worst affected of this is the predominantly cash based informal sector which contributes to 45% of the GDP and nearly 80% of the employment in the country. This move has seriously affected the poor and the middle class, especially women who have savings at home for emergencies. In a country that still has people without bank accounts, identity cards and with few banks branches in rural areas this drastic measure has left the poor stranded without alternatives.

According to former senior Vice President and Chief Economist, World Bank Kaushik Basu the decision to demonetise high denomination currency notes is not 'good economics' and the collateral damage of demonetisation is likely to far outstrip the benefits. All India Bank Employees Association (AIBEA) has stated that demonetisation wont help reduce black money and RBI has messed up the lives of crores of Indians by not planning properly the logistics for the demonetisation move.

Can such a move by the government, which has impacted all sections of the populations, but the poor and middleclass the most, go without a public debate and scrutiny? While it is too early to fully grasp of the impacts, what is the depth and spread of the impacts on people and the economy? How would demonetization help curbing black money? Going beyond demonetization, what is black-money, what could be the ways in which it could be curbed?

These are some of the questions Center for Financial Accountability and Public Finance Public Accountability Collective would like to address in a public meeting on November 18, 4-7 pm at Constitution Club (Speaker Hall), New Delhi.