Report release and Panel discussion. “Unfolding Crisis – The Case of Rising NPAs and Sinking Public Accountability” at Constitution Club of India in New Delhi at 3:00 p.m. on 14th September, 2016 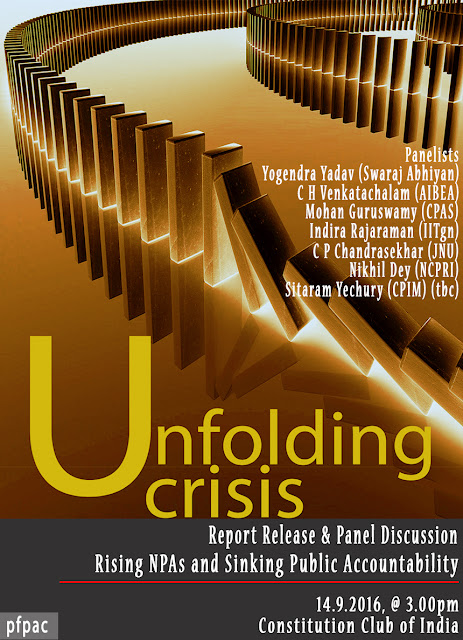 Additionally, PFPAC will be organising a panel discussion to analyse the intricacies of Non-Performing Assets (NPAs) with a panel consisting of notable people from across the social, political, economic and financial spectrum:

• Dr. Indira Rajaraman – Former Member of the 13th Finance Commission; Former Professor at Indian Institute of Management (Bangalore); and Former Member of Central Board of Directors, Reserve Bank of India

• Mr. Sitaram Yechury – General Secretary of the Communist Party of India (Marxist) and Member of the Rajya Sabha  (TBC)

The concept of institutionalized finance is a fairly complex issue whose nuances are often difficult to grasp. Keeping this in mind Unfolding Crisisseeks to demystify the NPA phenomenon by providing relevant facts, figures and trends to shed light on the factors leading to the crisis and also propose countermeasures which will ensure both the non-occurrence of such a situation and improve transparency and public accountability in the banking sector. This publication will be released in both English and Hindi.

The NPA phenomenon, as termed by the Huffington Post in an article published on 15th of July, 2016 is a classic case of cronyism. This crisis according to the above article can be traced back to the lending spree sanctioned by PSBs between the years 2008 and 2010. As a large portion of these loans were allegedly approved and lent without sufficient collateral, one can only speculate the extent of political pressure applied on the PSBs leading to violations of the basic tenets of banking common sense. The Reserve Bank of India (RBI) in its Financial Stability Report published in June 2016 had projected that the gross NPA rate of the banking sector could increase to 8.5% of the total advances. Dr. Raghuram Rajan had also made it clear that unless the stress in the banking sector is dealt with, growth cannot be revived. To further inflate the issue, if restructured loans are included within the ambit of NPAs, the situation is likely to go out of hand, adversely impacting the overall health of the economy.

We at PFPAC sincerely hope for both your presence and participation. The NPA crisis is at the cusp of criticality, whereby the stability and growth of the National Economy, the Industrial Sector and the average citizen may be substantially threatened. However, before this banking anathema is countered and corrected, it must first be discussed and understood. As Henry Williams had once said, “Furious activity is no substitute for understanding”.

Henry Kissinger had once stated, “Who controls money, controls the world”. The prophetic nature of this statement is clearly evident from the ever-increasing sway of finance over the social, political and economic path of not merely the nation, but the greater world at large. The sphere of operations and influence of finance capital has now reached every corner of the world. It has also become a controlling tool through increased concentration and centralization of capital in the hands of large corporations, cartels, trusts and banks. An outcome of these developments has been the wielding of extreme economic powers to influence political processes through mode of development finance. In light of this situation, various organisations across the country working towards social justice felt it imperative to establish an initiative which would dedicate itself to financial analysis with an aim to assist social movements in understanding the financial and economic logic behind the decisions, projects and situations, which are extensively anti-people in nature. This initiative formed in November 2015, named rather aptly the Public Finance Public Accountability Collective (PFPAC) will concentrate its efforts, not merely on sectoral research in direct relation with social movements, but also with regard to situations and developments in the world of finance, which it believes would have a significant impact on the general public and the economic stability of the country. Furthermore, the scope of PFPAC includes the imparting of training in the field of financial analysis to grassroots-level activists, who would then prove invaluable in achieving the aforementioned objectives.