By Nishank June 03, 2016
A report published by Centre for Budget and Governance Accountability (CBGA) on the institution of Comptroller and Auditor General (CAG), its auditing and reporting process falls short in many aspects, writes Himanshu Upadhyaya.

08 July 2015  -  This week a friend nudged me to read a report by a civil society organization which is known for its work on studying and de-mystifying budget documents. It reminded me of my article last year, where I took umbrage at auditors being lectured spectacularly by legislators. Yet another biannual conference of Accountants General, and yet another round of criticism of Comptroller and Auditor General (CAG) auditors by MPs as well as the Finance Minister.
Reporting in Public Interest, a new report by Nilachal Acharya, Subrat Das, Trisha Agarwala and Priyanka Samy, published by Centre for Budget and Governance Accountability (CBGA), appears to have been prepared as a discussion document for the 27th Accountants General (AG) Conference in October 2014. It is not known to citizens at large, if CBGA was invited by the CAG of India to prepare such a document as discussion item. As late as February 2015, it was being speculated that such a report exists, although not readily accessible to the public at large. It was only in March 2015, six months after the October conference that CBGA uploaded it to its web site (http://www.cbgaindia.org/new_publications.php). 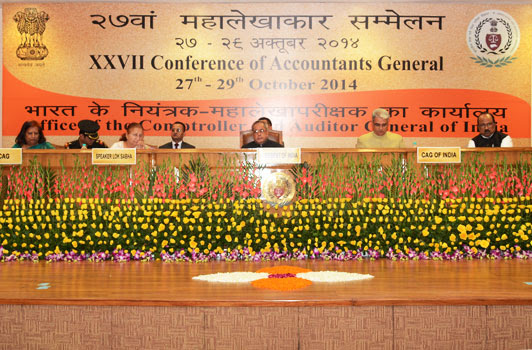 President of India inaugurated the biannual conference of Accountants General in Oct. 2014. Pic: saiindia.gov.in
The report is in two parts. The first part deals with the features of this constitutional institution, its auditing and reporting process and concerns with regard to reporting of audit findings. The second part presents perceptions of stakeholders based on interviews with selected respondents.
Too Much or Too Little
Recently, at a training workshop for civil society activists in Bangalore, I was asked, “Why does the banking sector remain outside the ambit of CAG audit?”. This question has large implications, as was clear from the malpractices in the sector that were revealed in aCobrapost sting. Should this too, then be brought within the purview of the CAG?
The respondents the CBGA spoke to don’t seem to agree. If the report (p. 08) is to be believed, “stakeholders” feel that due to the volume of audit reports being so high, proper follow-up and discussions in the PAC are not ensured. The CBGA report goes on to state:
“...we also need to take into account in this context the view that staff supporting the Parliamentary/Legislative committees, who read the audit reports and support the members of the Committees in comprehending the relevant points made in the reports,might not have adequate capacity to perform their roles effectively. Hence there also needs to be some effort towards enhancing capacity of those officials.”
In short, there are already too many reports, and the ones that are being written aren’t being communicated effectively.
Which view is right? Is the CAG doing too much auditing, or too little? Unfortunately, this report doesn't tell us the answer - it neither draws the readers' attention to the volume of audit work, not the processes that have been put in place so that the PAC can deal with the audit findings. To get a proper answer, then, we have to revisit the 1970s, and how Public Accounts Committee responded then to the growing volume of audit reports.
Right from the mid 1970s, Indian Audit and Accounts Services (IAAS) officers have been deputed to assist parliamentary committees. Additionally, the CAG of India is regarded as “friend, philosopher and guide” to the Public Accounts Committee and the Committee on Public Undertaking, and attends all their meetings. Officers can speak up whenever their guidance is required. And with the right people in place, this arrangement can work well. Within three years during the mid-1970s, for example, the PAC prepared 137 reports on audit findings, when the late N. Sunder Rajan assisted the PAC in his role as Under Secretary and on subsequent promotion as Deputy Secretary in the Lok Sabha secretariat.
One other thing that could help make the audits more effectively is public engagement about their findings, and actions taken. The CBGA report itself cites a few consultations with civil society experts, ministry officials and corporates on issues such as environmental auditing and audit of water pollution on a few occasions. Citing positive outcomes of these, the report recommends that “the office of CAG could think of replicating similar exercises of public engagement across a range of government programmes and schemes in the coming years”.
Audit reports on CAG website
The CBGA report also contains an assertion (p. 10) which is only half-true, when it alleges that “In India, the audit reports, which are uploaded on the website of the CAG (once these are laid in parliament/ state legislatures), do not carry the date of their submission (either the date of submission by the CAG or the date of report being laid in parliament/ state legislature)”. The second part of this assertion is definitely false as the date of a specific report being laid in parliament/ state legislature is prominently displayed on the page on CAG website which contains hyperlinks to different chapters of that specific report. Those who do actually care to read CAG audit reports would also remember that the text of the audit findings usually have the last paragraph that mentions when did CAG of India share with audited entity/ ministry Draft Audit Report and usually incorporate replies, if any.
Issues that got missed out
The report has missed pointing out issues that need urgent attention before that heaven of transparency so eagerly sought by CBGA can unfold. The first and foremost of these is: how much does a common man, out there on street, know about the decision making processes within the CAG? And what knowledge do we have of how these processes need to be strengthened?
Right from the biannual AG conference that took place in 2008, there has been discussion about the IAAS officers and Indian Audit and Accounts Department (IAAD) fraternity seeking amendments to the CAG (Duties, Powers and Condition of Services) Act, 1971. Media also speaks at times about a draft amendment bill, but why has the draft bill remained inaccessible to citizens passionate about public finance and accountability issues?
The report has also failed to look inward at the continued indifference of citizen groups to audit findings. Shouldn’t budget analysis and engaging with audit reports have become after years of advocacy, ‘everyone’s business’? This author was once told by someone that “audit reports are gold mines, the sad fact is that people don’t mine them”. Even as I finish reading and reviewing the CBGA report, these words ring in my ears - “we can only stop being accountability-challenged when we stop lecturing the auditors, and start listening to them instead”.
May the tribe of those who listen to CAG auditors grow. Most of us have nothing to lose but the delusion that it requires a MA or PhD in Economics to read and understand these. They are very good instruments for progress in governance, if only we would use them.
Himanshu Upadhyaya
08 July 2015
The author has been a close follower of many grassroots movements and is presently a faculty member at  the Azim Premji University, Bangalore.

(Reproduced with the permission of the author).